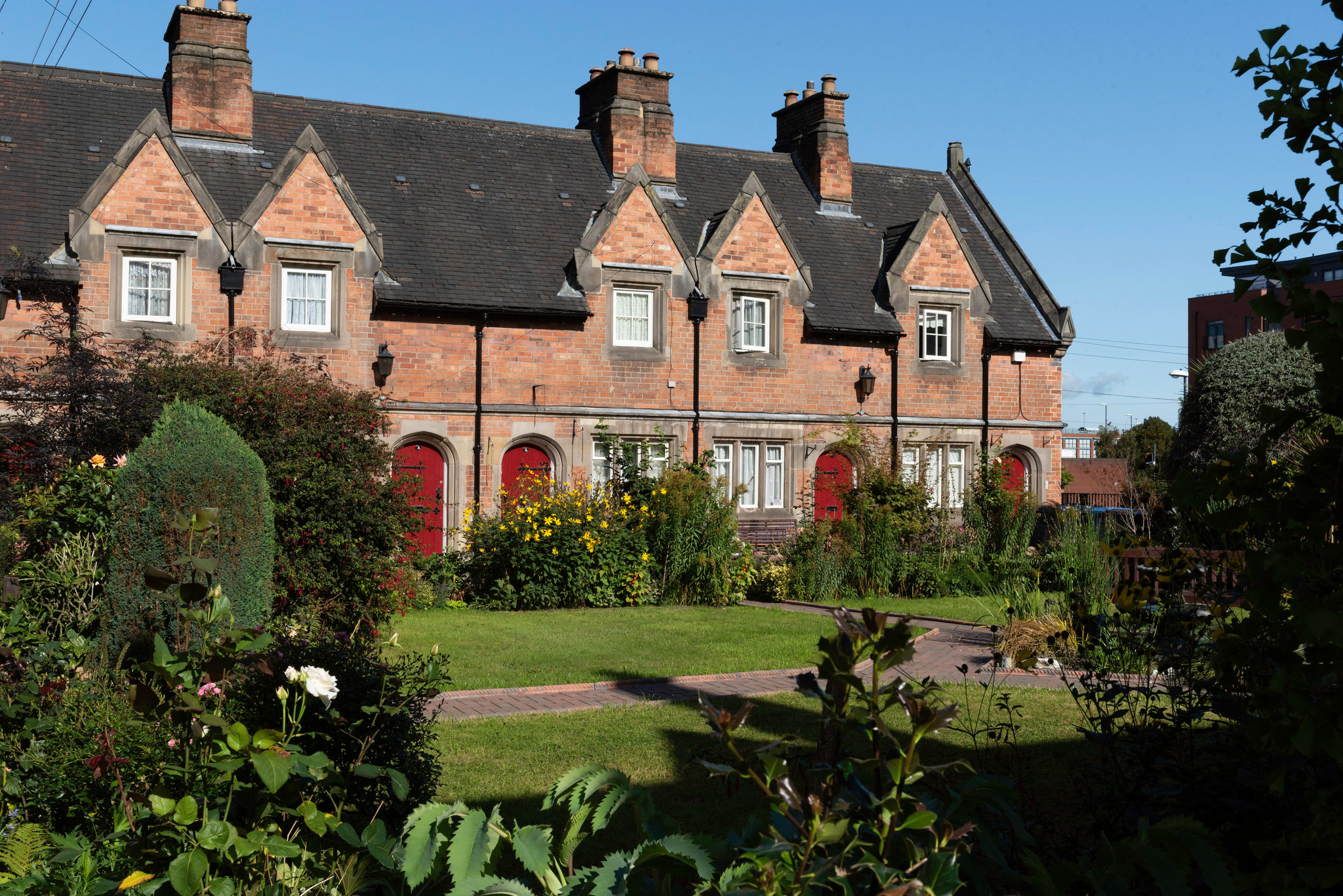 Almshouse Charities have been in existence for over a thousand years. The Liversage Trust dates back to 1529, set up under the Will of Robert Liversage, a prominent Derby businessman of the time, for the relief of poverty. The Trust has maintained Almshouses since the 17th century including some lovely historic buildings dating back to the 1800s, but most homes were built in the 1900s.

From our founding, Liversage Trust has been managed by a board of Trustees. Today our board has 15 trustees, and together we work to help people in Derby struggling to afford the cost of living and continue to carry out the good work of our founder, Robert Liversage. Janet has been a Liversage Trustee for over 27 years and Chair of the Board since 1996. In the past Janet was also a City Councillor and Mayor of Derby.

Janet’s hobbies include dancing, gardening and supporting Derby County Football Club, but her overriding passion is her family. Vice Chair of the Board and Chair of Finance Committee

Malcolm has been a Liversage Trustee since 2000. As Vice Chair of the Board and Chair of Finance Committee, Malcolm helps to manage the finances. Outside of his commitments to the Trust, Malcolm is interested in history and is an avid collector of anything and everything and also enjoys playing golf. John is a Derby lad, and developed his interest in housing through a career with Derby City Council. John has been with the Liversage Trust for over 25 years. He is currently Chair of Estates Committee. He is also a keen Derby County fan, and enjoys spending time with his wife and their 10 grandchildren. Roy retired from Rolls Royce in 2015, after having worked there for more than 40 years. He has represented Allestree Ward in the City since 1985, as both county and city councillor, and is also a Board member of Derby Homes. He joined the Trust in 2004 and currently serves as Chair of Care Home Committee. Les stood down to devote more time to travelling and seeing his family. He also re-joined as a Liversage Trustee in 2013 and is currently the Vice Chair of Care Home Committee. Mary is our longest serving Trustee; being with us since 1984. Mary came to stay with a friend in Derby in 1964 and never left. In 1983, Mary was elected as a Derby City Councillor and became known for her no nonsense approach. Being very close to her family, Mary is passionate about the Trust providing a safe family environment for our residents Sue joined as a Trustee in 2006, after a career in local government, culminating in being appointed Director of Policy at Derby City Council. She currently serves the Trust as Vice Chair of Finance, as well as advising on personnel matters.

In what other spare time she has, she enjoys walking and gardening. Richard moved to Derby in 1985 to develop his housing career and fell in love with the City and its surrounds. He joined the Trust in 2016, after retiring as Company Secretary with the Chartered Institute of Housing. He has a strong interest in housing and good governance, and is dedicated to his family. Michael is a Lancastrian but spent most of his working life in Derby.
A solicitor, he also had responsibilities for adult social care and housing at Derby City Council.

Michael became a Liversage Trustee in 2012 and volunteers for a national charity, with football, swimming, hill walking and four grandchildren taking up much of the rest of his time. Paul became Vicar at St Peter’s Church in Derby in 2009, and in accordance with his office, also became an ex-officio Trustee. The bond between the Trust and St Peter’s dates back to 1532.

Having studied theology at St John’s College in Nottingham, Paul has worked for the Church throughout the UK and Europe. Tim has been a Liversage Trustee since 2010. Derby born Tim is a lay-reader at St Peter’s Church and an avid supporter of Derby County; his Grandfather was the team doctor in the 1946 cup final. Tim is also a family man and is surrounded by music as his wife teaches brass instruments and his daughters play the violin. Kashmir-born Shiraz came to Derby when he was six years old and has lived in the city ever since, raising five children and two grandchildren. He was first elected councillor for Arboretum in 2004 and was Mayor of Derby in 2014/15. He currently runs a sub-post office and newsagents just outside Derby, at Sawmills. Frank joined the Trust in 2013. Passionate about helping people, Frank is a Councillor, serves on 7 committees and is the Chairman of the Oakwood Neighbourhood Board. Derby born Frank is a Ram’s supporter, a former football referee and was the senior Linesman in the Challenge Cup Final at Wembley in 1981! Mike joined as a Trustee in 2017 after being nominated by Derby City Council. He has been the local councillor for Littleover since 2002, and has worked in engineering all his life, spending much of his career at Rolls Royce after serving his apprenticeship at Derby Rail workshops.

If you are interested in any of our services and would like to get in touch, we would love to hear from you!